In the spring of 2012 i traveled to Japan to visit a friend who was teaching In Hiroshima with a couple of friends. Having had a whistlestop tour of Hiroshima we also managed to spend several days exploring Kyoto, Osaka and Nara. Eight days could never be enough, I think i could have spent months in Kyoto alone exploring the literally hundreds of temples and gardens that are scattered both in and around the city.

Highlights included visiting Ryoan-ji: the Temple of the Peaceful Dragon, Ginkaku-ji (Temple of the Silver Pavilion), the gardens at Isuien, the spectacular Zen temple of Tōdai-ji. We also spent a day visiting Itsukushima – an island in the western part of the Inland Sea of Japan, northwest of Hiroshima Bay. It is comonly  known as Miyajima or ‘the Shrine Island’.

“What a strange thing! to be alive beneath cherry blossoms.”

Not only were we lucky enough to be visiting Japan at the start of the cherry blossom season,  but purely by chance it also coincided with the the spectacular shingen-ko-matsuri festival.

The Shingen-ko Festival takes place in Kofu. Held on the first weekend of April each year the main highlight is the Koshu Battalion Deployment, which is Japan’s No.1 largest reenactment of warriors. Around 1,600 locals dress in traditional samurai costumes and march around Kofu. The festival celebrates the legacy of Yamanashi’s famous warlord, Takeda Shingen – and apart from the spectacular sight of so many people dressed up in the most colourful and beautiful costumes, there is plenty of food music and saki to make sure everyone enjoys themselves! 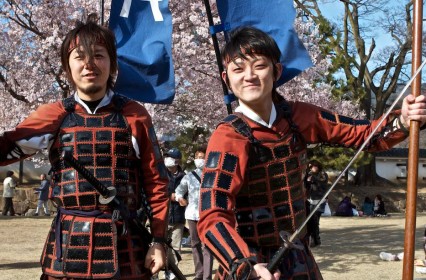 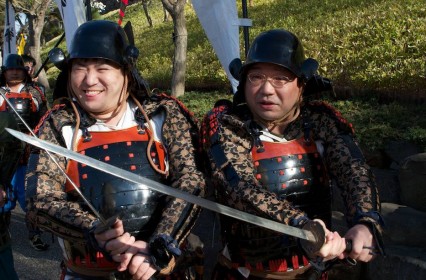 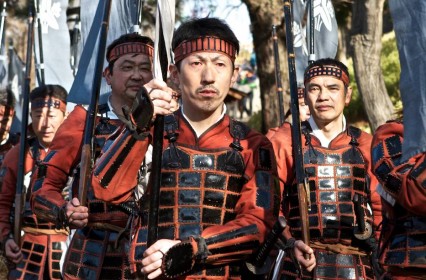