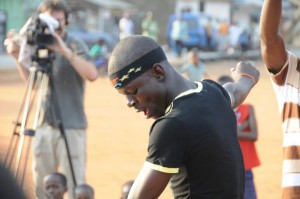 Just returned from filming in Ghana for the second documentary in the ‘Visions’ series for Substantial films.

Four years ago, Marieke de Lange co-founded a travelling theatre to empower underprivileged children by staging theatrical performances in their communities that address issues pertinent to the problems they face. Based in Accra, Marieka is working to inspire a poverty-stricken community by making street children aware of their talents and qualities through performance. Her aim is to empower these children by allowing them to inform the communities of the issues surrounding their plight. This process personalises situations that societies so often objectify as an easy coping mechanism.

We’re heading back to ghana in four weeks, and again in august to document how the project develops, and at some point i’ll hopfully be able to post a few pictures and news as things develop… !