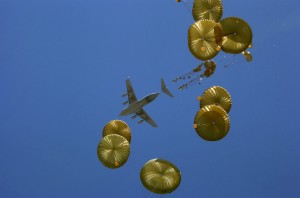 But this really isn’t the case – you can enable AirDrop with Ethernet and enable AirDrop support on unsupported Macs running OS X 10.7+ by using the following defaults write command in the Terminal:

Type or paste the above and hit enter. You’ll then need to reboot the finder either with the ‘killall Finder’ command or reboot the Mac for changes to take effect.

The best bit  is that this enables AirDrop over both Wi-Fi and wired Ethernet connections, in other words any machine running Lion can use it whether or not it has a wireless card. As long as it’s connected to the same network you will be able to see the Mac in the AirDrop list of another Mac running 10.7.

If you ever want to disable this for some reason, you can just use: